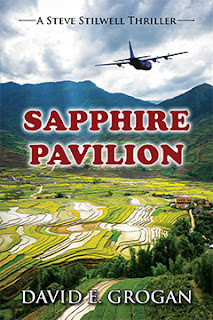 Steve Stilwell’s former Navy JAG Corps buddy Ric Stokes has been jailed for possession of heroin in Vietnam. He was found in the same room with his traveling companion Ryan Eversall, dead of an overdose and in the company of a prostitute. Steve knows his friend is a straight arrow. Was he set up? If so, for what reason? Steve travels to Ho Chi Minh City in search of the truth. In no time Steve is targeted by the people who framed his friend. A beautiful young American businesswoman insinuates her way into the case. Can she really help, or is she just a dangerous distraction? Ric and Ryan came to Vietnam in search of an Air Force transport plane that disappeared in 1968. The pilot was Ryan’s father. Before the heroin bust, they had located the wreckage. Ryan’s notebook, which Steve manages to obtain, spells out the exact location. Ryan’s widow has given Steve’s associate Casey another piece of valuable evidence, a file labeled “Sapphire Pavilion.” Someone is willing to go to any lengths to steal both the notebook and the file. From Virginia and Texas to DC and Vietnam, powerful, all-seeing forces with unlimited resources are determined to bury the truth about Sapphire Pavilion. But they have grossly underestimated Steve Stilwell and his associate Casey, a former Army pilot who lost her leg in a helo accident. And the ability to inspire loyalty wherever you go can come in handy when danger lurks behind every corner.

This book is set in Vietnam.

The American author wrote it while in Vietnam.

It's an authentic portrayal of an oft misunderstood place and it shows how it is right now, today. The author could've relied on his imagination, secondhand research, TV, movies, the Internet, etc. But he chose not to. Instead, he did the legwork and brought current day Vietnam to life from his own personal perspective. And let me tell you, it makes for a much more interesting read.

I felt like I could trust him, and what he was showing me. The ever present bribery. The oppressive heat. The crowded streets of a bustling Saigon. What he saw and felt, he was letting me see and feel too. And from one American to another, he was giving me a glimpse of the generational effects that the war has had on both countries. There's a great line that I just have to quote that comes from the point of view of Steve, the American lawyer/tourist and how he views his young Vietnamese motorcycle driver, Phan.


"Keenly aware that he was insanely wealthy compared to Phan - made him appreciate Phan's willingness to reach across the divide to help him even more. He offered to help at a basic human level."

The encounter begs the question: Is Phan more open minded because he was born after the war?

Because in a similar exchange Steve has with an older woman in a public park, he gets a much different reaction.


"The woman's hostile glare stayed with him reminding him Americans weren't the only ones scarred by the Vietnam War."

It's interesting that even in America today, many feel the up and coming generation is more tolerant of differences and displays more initiative to help others, even people who look different from them. It's an encouraging sign that the author noticed this in Vietnam too. It seems that the youth of both countries are able to look beyond the past and see a brighter future of cooperation and hope.

And that's what I'll take away from this book. Thanks to an author who was considerate enough to bring these two encounters to light, and what they meant to him. Whether they're fictional, based on real life, or a little bit of both—it's all good.

Sapphire Pavilion can be purchased at:
Amazon
Barnes and Noble 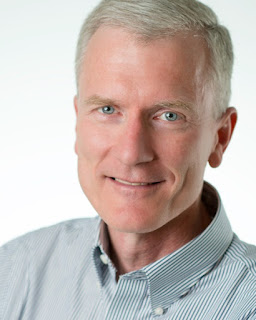 David E. Grogan was born in Rome, New York, and was raised in Cleveland, Ohio. After graduating from the College of William & Mary in Virginia with a B.B.A. in Accounting, he began working for the accounting firm Arthur Andersen & Co., in Houston, Texas, as a Certified Public Accountant. He left Arthur Andersen in 1984 to attend the University of Virginia School of Law in Charlottesville, Virginia, graduating in 1987. He earned his Masters in International Law from The George Washington University Law School and is a licensed attorney in the Commonwealth of Virginia.

Grogan served on active duty in the United States Navy for over 26 years as a Navy Judge Advocate. He is now retired, but during the course of his Navy career, he prosecuted and defended court-martial cases, traveled to capitals around the world, lived abroad in Japan, Cuba and Bahrain, and deployed to the Mediterranean Sea and the Persian Gulf onboard the nuclear powered aircraft carrier USS Enterprise. His experiences abroad and during the course of his career influence every aspect of his writing. Sapphire Pavilion is his second novel. His first was The Siegel Dispositions.

Grogan’s current home is in Savoy, Illinois, where he lives with his wife of 33 years and their dog, Marley. He has three children.

a Rafflecopter giveaway
Posted by City Girl Who Loves to Read at 12:01 AM

A blog that takes a look at how an author creates the perfect book setting.